How Sports Organisations Can Be Data-Smart To Kickstart Success

As Australia moves slowly back to normal following lockdown, sporting clubs are getting back into the swing of things. Far from normal however, the 2020 season will be a season like no other before it, with changes to crowd capacities, training restrictions, and the consequent impacts on membership, sponsorship, and revenue, many sporting clubs are facing a year ahead with a devastating dent in their bottom line.

So what can you do if you are a club, and you want to minimize that revenue hole as much as possible? The answer is to laser-focus on driving a compelling dialogue with fans and to use that dialogue to power your fan engagement program like never before.

Fan loyalty in Australia is second to none. Aussies avidly watch and attend games and want to interact with clubs and players. However, most clubs are struggling to capture data on these fans and their behaviours, and what data they do have is either not used or too ‘piecemeal’ to be effective. This presents a challenge as it means most clubs lack the ability to reach out to fans in a meaningful and personalised way and understand the negative effects of non-personalised communications over time.

Every club knows that an engaged fan is worth more to them than a peripherally engaged fan, and that a super-fan is worth more than that. Every club also knows that a large, highly engaged fan base also increases the number of sponsors wanting to invest. But without understanding the individual fan and their current level of engagement, clubs battle to take them on a journey from the periphery of the sport, to becoming passionate and high-value.

The reason for this situation is historical. Chief Commercial Officer at Melbourne Storm, Nick Haslam, says that clubs have traditionally relied on TV-driven metrics to sell sponsorships, so they’ve been a little slow on the uptake of data and analytics to move to a more personalised connection with fans to drive revenue.

“Moving forward, we see data and analytics as pivotal to the growth of our business. We see significant value in using data to grow consumer revenue by engaging existing ticket holders to spend more with us, through things like merchandising and memberships, by better understanding their journeys,” he said.

So given the collection and use of this data can make all the difference to sporting clubs, how can clubs and organisations kickstart becoming more data-smart?

Fans go through a clear and predictable journey to becoming engaged. The key is to understand where your fan is in their engagement journey and deliver content and experiences that move them from one stage of that journey to the next. Each step on that journey means you know more about the fan, their turn-ons and turn-offs, and along with that increased knowledge, comes a greater opportunity to drive revenue and a greater value to sponsors. 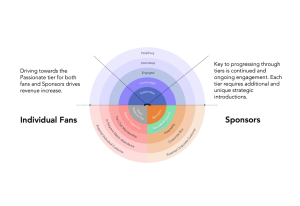 Every Experience Is An Opportunity To Learn From Fans

Every experience that marketers create is an opportunity to gather insightful data about fans and drive further interactions. There is a wealth of information that you can discover such as demographics, living situation, sporting heroes, participation rates at games, favourite brands, merchandise purchases and more. But the key to gaining access to this data is the right ‘value exchange’ coupled with the right technology.

Clubs should be actively developing new and exclusive experiences and content to gather data, and then use that data to deepen understanding of their audience and build programs to amplify engagement. There are many ways to go about this. For example, a club might want to hold an exclusive competition, where fans willingly share their details for a chance to win. Apps are also becoming an increasingly popular way of harnessing fan data in exchange for exclusive experiences and content. 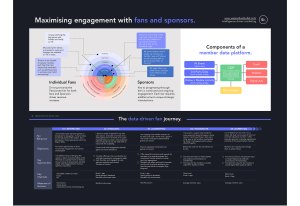 In our fan engagement model, we focus on collecting data on fans and their actions as early as possible. This is done through two primary tactics:

Collecting data is only the first part of the strategy. Using data to understand the fans and where they are on their individual engagement journey is the key to maximising their lifetime value. The data collected provides signals and insights which the club can use to ‘nudge’ the fan from one stage to the next – moving them towards becoming passionate, high value, ‘super fans’.

This data can also be used to unlock deeper insights, such as how members and fans like to get involved, what content they consume, their demographics, or why they cease membership. Profiling with the power of data can also enable clubs to test and learn about how to best approach fans in the most relevant way.

All this information can be used to deliver personalised marketing messaging across multiple channels. Once a rhythm is established, it’s easier to scale marketing efforts off the back of learnings and successes – and this is where clubs will achieve return on data investment. Remember, the deeper you go, the more value you’ll get.

In our fan engagement model, as a fan becomes more engaged a few key things change:

Beyond marketing and communicating to fans, better data opens up other key opportunities for clubs through their sponsor relationships. At a time when corporate sponsorship is difficult to obtain as businesses contract spending, a better data environment presents a superpowered value case for corporate sponsorship. Richer profiles of fans, and a better data-environment offer up two key opportunities for sponsors. Firstly, it enables profiled and targeted member-only offers, increasing relevance and affinity between the sponsor and the member and giving the sponsor an additional path to market. Secondly, it allows the club to provide an additional layer to the sponsors’ customer insight efforts, helping the sponsor understand their customers at a level and depth which would be unavailable otherwise and can power real and tangible value.

Key Tips To Getting Your Club Back On Track:

Looking to transform your data and tech strategy? Look no further. Get in touch with our expert marketing services team today.

See all our services